In a Desperate Search for Some Round TUITs

Do you or someone you know have a problem with putting off unpleasant or difficult tasks? I’ve been thinking of addressing this plague of procrastination for a while, but I’m just getting around to it. As someone has said, “Why do today what you can put off until tomorrow?” Mark Twain extended that thought: “Never put off till tomorrow what may be done day after tomorrow just as well.”

I suspect that each of us has ventured into the realm of “procrastinator-ism” from time to time. Maybe you’re even reading this to put off doing something else, such as doing your taxes. (April 15 is right around the corner, in case you’ve conveniently forgotten.) Paying bills can be another of those undesirable, procrastinate-able duties, as are washing windows, cleaning the garage or attic, or other forms of spring cleaning.

If someone were to judge from our planning and subsequent execution of those plans, one might conclude there actually are eight days in every week: Sunday, Monday, Tuesday, Wednesday, Thursday, Friday, Saturday, and…Someday. 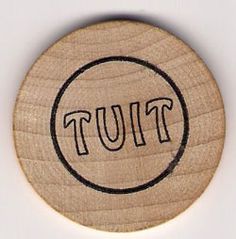 Being a writer, procrastination has often become a close companion. The act of writing, especially because it’s a complex commitment of time and energy, can be daunting. I can relate to the wisdom of Bill Watterson, author of the “Calvin and Hobbes” cartoon strip: “You can’t just turn on creativity like a faucet. You have to be in the right mood. What mood is that? Last-minute panic.”

Years ago, I was telling an elder gentleman about a project I had been meaning to get to, but was finding trouble getting around to it. With a twinkle in his eye, he reached into his pocket and pulled out what seemed like a large wooden coin. He handed the round object to me and on it was etched the word, “TUIT.” He had given me the solution to procrastinating – a round TUIT.

What a handy, tangible reminder for getting on with something that you’ve been keeping in neutral. The best of intentions might be better than the worst of intentions, but ultimately, they’re intentions just the same until we take steps to move them into action. In his book, David Copperfield, Charles Dickens wrote, “Procrastination is the thief of time, collar him.”

Perhaps this is why the Bible has much to say about this problem. Proverbs 10:4-5 says it plainly: “Lazy hands make a man poor, but diligent hands bring wealth. He who gathers crops in summer is a wise son, but he who sleeps during harvest is a disgraceful son.” And Proverbs 14:23 offers a slightly different slant: “All hard work brings a profit, but mere talk leads only to poverty.” Procrastination can have financial consequences.

Daydreaming is a favored pastime for procrastinators, conjuring up visions of what could happen if they actually did what they were thinking about – without actually doing it. “He who works his land will have abundant food, but he who chases fantasies lacks judgment” (Proverbs 12:11).

I have one writing project I’ve been talking about, thinking about and dreaming about for too long. As I write this, I’m preaching to an audience of one – ME. As soon as I’m done with this, I’m determined to shift to that. As St. Augustine of Hippo said, “God has promised forgiveness to your repentance, but He has not promised tomorrow to your procrastination.”

Email ThisBlogThis!Share to TwitterShare to FacebookShare to Pinterest
Labels: all hard work leads to profit, Charles Dickens, delaying, procrastination, procrastination is the thief of time, procrastinators, put off until tomorrow, putting things off, whatever your hands find to do