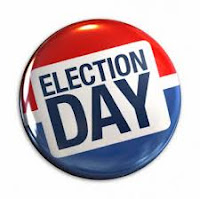 Millions of us have already voted, whether early in person or by mail. So from our perspective, it’s all over except the shouting. And there’s bound to be lots of shouting, no matter what the final vote counts show. But for many other millions of American citizens, tomorrow is what it’s always been: Election Day, the first Tuesday of every November. Being a Presidential election, that makes it a bit more important.

With the unfortunate polarization of our nation, regardless of the outcome, the “losing” side is bound to begin collective gnashing of teeth, convinced the world as we have known it will never be the same. But take heart – there is good news. Very good news.

While the Bible does not speak about voting and political elections, it does offer wisdom and assurance concerning those selected to lead in government. For starters, Romans 13:1 instructs, “Everyone must submit himself to the governing authorities, for there is no authority except that which God has established. The authorities that exist have been established by God.”

This is stating that regardless of the results, God is neither surprised nor caught off guard. All who serve do so in accord with God’s sovereign will, including evil leaders. Consider some of the those in the Bible, people like King Saul, Israel’s first king who came to an inglorious end; and pagan kings Artaxerxes, Cyrus, Nebuchadnezzar, Darius, Ahab and his despicable queen Jezebel, king Herod and Pontius Pilate. Even kings David and Solomon compiled very flawed resumes.

Not one of these was a paragon of virtue in any sense of the word, but the Lord used them all to accomplish His divine purposes.

The apostle Paul gave a similar admonition to Titus, one of his protégés: “Remind the people to be subject to rulers and authorities, to be obedient, to be ready to do whatever is good, to slander no one, to be peaceable and considerate, and to show humility toward all men” (Titus 3:1-2).

Paul was not alone in presenting such teaching. The apostle Peter also wrote, “Submit yourselves for the Lord’s sake to every authority instituted among men: whether to the king, as the supreme authority, or to governors, who are sent by him to punish those who do wrong and to commend those who do right. For it is God’s will that by doing good you should silence the ignorant talk of foolish men” (1 Peter 2:13-15).

This sounds difficult, and may not make sense in light of today’s contentious political climate. We can only confidently heed such instructions if we place our ultimate trust in God, believing He rules and overrules as He sees fit.

But there's another type of election we should also consider, one that does not involve a ballot box. It’s the election the Lord has ordained for those who join His eternal family. His is the only vote.

Opening his first letter in the New Testament, Peter addresses his audience: “To God’s elect, strangers in the world…who have been chosen according to the foreknowledge of God the Father, through the sanctifying work of the Spirit…” (1 Peter 1:1-2). Who are these “elect”? As the apostle explains, those who have been chosen by God.

Paul also understood this perspective, using the term a number of times. For instance, in 2 Timothy 2:10 “Therefore I endure everything for the sake of the elect, that they too may obtain the salvation that is in Christ Jesus with eternal glory” (2 Timothy 2:10).

The apostle opens his letter to Titus by encapsulating his personal calling: “Paul, a servant of God and an apostle of Jesus Christ for the faith of God’s elect and the knowledge of the truth that leads to godliness – a faith and knowledge resting on the hope of eternal life, which God, who does not lie, promised before the beginning of time” (Titus 1:1-2).

It was not only the apostles who thought and spoke in terms of God’s “election.” Looking ahead to what the Bible calls “the end of days” and His second coming, Jesus Christ told His followers, “If the Lord had not cut short those days, no one would survive. But for the sake of the elect, whom he has chosen, he has shortened them…. At that time men will see the Son of Man coming in clouds with great power and glory. And he will send his angels and gather his elect from the four winds, from the ends of the earth to the ends of the heavens” (Mark 13:20-27).

Why mention this? Because we won’t know until tomorrow – or perhaps days or weeks after that, given the chaotic state of the current election process – who won and who lost. Meanwhile, based on promises of the Scriptures and Jesus Himself, we can have full assurance we are His “elect,” His chosen people, if we accept His free gift of salvation and deliverance from the guilt of sin.

“Yet to all who received him, to those who believed in his name, he gave the right to become children of God – children born not of natural descent, nor of human decision or a husband’s will, but born of God” (John 1:12-13).

This is one election result we don’t have to sweat out: “I write these things to you who believe in the name of the Son of God so that you may know that you have eternal life” (1 John 5:13). Have you had your “election day” yet?