Is This a Cross You’re Willing to Bear?

We see them everywhere: on rockers and rappers, pro athletes and politicians, store clerks and restaurant servers, movie stars and mail carriers, even relatives and friends. Maybe you have one or more of them yourself. What am I talking about? Ornamental crosses people wear around their necks. 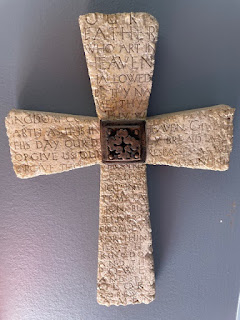 Some crosses come small, plain and simple, others large, ornate and ostentatious. Gold, silver, steel, gem-studded, even carved from wood. For many of the wearers, they’re little more than a piece of jewelry or accessory.

Whenever I see someone wearing one, I immediately wonder, “A follower of Christ?” Sometimes that’s the case. Other times, it’s not. For example, when we hear some cross-adorned celebrity lacing his or her acceptance speech at an awards show with a barrage of obscenities. Or a wide receiver preening in the end zone, pounding his chest rather than pointing upward.  If they’re a follower, it must be from a considerable distance.

People have a right to wear whatever they choose, of course, and many decorative crosses offer a lot of visual appeal. For thousands, the crosses they wear are more than jewelry. They’re genuine, outward symbols of the faith they embrace on the inside.

However, the origin of the cross wasn’t some fashion designer’s brainstorm. It was an innovation of the Roman Empire, a tortuous form of execution said to be the most inhumane way to die. In those days, people weren’t wearing crosses around their necks. For them, the image of the cross represented a hideous end they hoped never to experience. Envision a necklace from which hangs a miniature gallows, or electric chair. 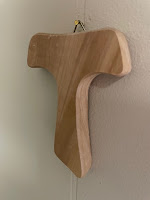 Historians say the practice of wearing crosses originated early in the fourth century. While in Assisi, Italy a couple of years ago, I discovered a T-shaped Tau cross was favored by Saint Francis of Assisi. Liking its simplicity, I bought a small wooden replica. Through the years, artists have fashioned cross designs in many different ways, from bejeweled creations to ones inscribed with various messages.

In the Scriptures, references to the cross are definitive – the sacrificial death of Jesus Christ, paying a debt He did not owe because we owed a debt we could not pay, as the old song goes. While nowhere in the Bible do we find a prohibition against wearing a cross or displaying it, it’s clear that for Jesus’ followers, the cross means willingness to die to self and follow Him, whatever the cost.

In Luke 9:23-24, the Lord says, “If anyone desires to come after Me, let him deny himself, and take up his cross daily, and follow Me. For whoever desires to save his life will lose it, but whoever loses his life for My sake will save it.” Jesus isn’t calling for death on a literal cross, but being willing to put to death desires and ambitions that conflict with His call on our lives.

This is one reason the apostle Paul wrote, “But God forbid that I should boast except in the cross of our Lord Jesus Christ, by whom the world has been crucified to me, and I to the world” (Galatians 6:14). He also wrote about dying every day – to self and any purpose other than what God had for him: “I affirm, by the boasting in you which I have in Christ Jesus our Lord, I die daily” (1 Corinthians 15:31).

I doubt Paul would have considered wearing a necklace or any kind of jewelry adorned with a cross, because for him it represented sacrificial ministry, anchored in an unwavering trust in Christ. This is why he could say with confidence, “For to me, to live is Christ and to die is gain” (Philippians 1:21).

So, if you’ve got a favorite cross you like to wear, a symbol of your faith in the Lord, let it also serve as a reminder of how much it cost – the once-and-for-all death of Jesus Christ to atone for the sins of everyone who would receive His gracious gift of forgiveness and restoration.

And when you see someone else wearing a cross, but don’t know what it represents for them, pray that God will open their eyes that they too will come to understand its true meaning.

Email ThisBlogThis!Share to TwitterShare to FacebookShare to Pinterest
Labels: cross, cross of Christ, cross of Jesus Christ, deny himself and take up his cross daily, I die daily, wearing crosses