Gloom and Doom Need Not Dominate This Holiday

Another annual celebration of ghosts and goblins and witches and Jack-o-lanterns is upon us. I’m not among them, but there are some people for whom Halloween ranks as a favorite holiday, surpassing even Christmas and Thanksgiving. Interesting. 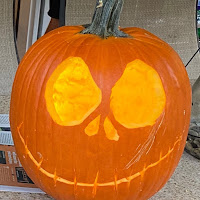 Driving around – yes, you can still do that even in these COVID days – I’ve noticed several yards when the homeowners have devoted a lot of time making their yards look as scary as possible. Several TV cable networks have scheduled Halloween-themed movies all month. And civic leaders are deciding what social-distancing guidelines are best for trick-or-treating.

The Bible says nothing directly about Halloween, unless you accept the little girl’s misinterpretation when she was asked to recite the Lord’s Prayer: “Our Father who art in heaven, Halloween Thy name….” For many folks, Halloween is nothing more than a fun day for wearing silly costumes and passing out candy. However, it does have its dark side, as depicted by gory horror movies that make it a focal point. Death is a recurring theme, and throughout history there have been those for whom All Hallow’s Eve has been a sacred rite.

Much is said in the Scriptures about the inescapable reality and specter of death. For instance, the book of Romans tells us about the problem,“for all have sinned and fall short of the glory of God” (Romans 3:23), as well as its consequence and its remedy, “For the wages of sin is death, but the gift of God is eternal life in Christ Jesus our Lord” (Romans 6:23).

Referring to Christ’s atoning death for our sins, another passage offers these words of assurance:

“If we have been united with him like this in his death, we will certainly also be united with him in his resurrection. For we know that our old self was crucified with him so that the body of sin might be done away with, that we should no longer be slaves to sin – because anyone who has died has been freed from sin…. The death he died, he died to sin once for all, but the life he lives, he lives to God. In the same way, count yourselves dead to sin but alive to God in Christ Jesus” (Romans 6:5-11).

James Ward, who for many years served as music director and worship leader at New City Fellowship in Chattanooga, composed a wonderful song affirming that for the follower of Christ, death need not conjure the grim images we often see at Halloween. Instead, one’s passing from this life can indeed be a time for joyous celebration.

This upbeat, inspiring tune, called “Death Is Ended,” is based on 1 Corinthians 15:51-55, which declares:

“Behold, I tell you a mystery: We shall not sleep, but we shall all be changed – in a moment, in the twinkling of an eye, at the last trumpet. For the trumpet will sound, and the dead will be raised incorruptible, and we shall be changed…then shall be brought to pass the saying that is written, ‘Death is swallowed up in victory. O Death, where is your sting? O Hades, where is your victory?”

If you’re observing Halloween this year – in some respects, it seems all of 2020 has been one continuous enactment of Halloween at its worst – I hope for you it’s funny costumes and tasty candy treats. But if you find yourself dwelling on the sobering, gloomy aspects of the day, please take to heart this glorious promise:

“The sting of death is sin, and the power of sin is the law. But thanks be to God! He gives us the victory through our Lord Jesus Christ” (1 Corinthians 15:56-57).

Email ThisBlogThis!Share to TwitterShare to FacebookShare to Pinterest
Labels: All Hallow's Eve, death, Death Is Ended, death is swallowed up in victory, death where is your sting, for all have sinned, Halloween, James Ward, the wages of sin is death