For the last several weeks, my wife and I have been “serenaded” by someone in a neighborhood next to ours who sits on his back patio, strumming his guitar and singing – actually, kind of wailing – old folk songs. I’ve never met the fellow, but he sounds like some of the outtakes that are featured as each season of “American Idol” begins.

I do have to give him credit. Even though he’s never going challenge the likes of Josh Groban, Kenny Chesney or Michael Buble, he’s obviously giving his all. He’s putting his heart into it, even though his vocal range leaves something to be desired.

Which reminds me of an admonition from the Scriptures. Psalm 100:1 says we’re to, “Make a joyful noise to the Lord,” and if you’ve ever heard me sing – in a church setting, or anywhere else – that’s the best I can do. If I were to audition for the church choir, the director would ask me to sing “far, far away” or solo – actually, so low that no one could hear me. So, “wailing Willie” has nothing on me.

But I wonder what God thinks. Other translations of the verse above are to make a “joyful shout.” The key word is not what kind of noise we make, but how it’s done – with joy. Philippians 4:4 admonishes us to, “Rejoice in the Lord always. I will say it again: Rejoice!” And in 1 Thessalonians 5:16 we’re told, “Be joyful always.” It’s not the quality of the sound, but what’s behind the sound – our joy in Christ – that matters to the Lord. 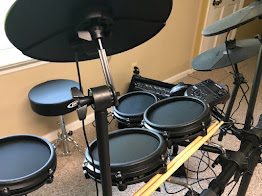 My musical vehicle of choice is playing the drums, a pastime I renewed this year. I was in the percussion section in my high school band, and kept a set of drums into my early adulthood, but then I sold them, leaving me with only the steering wheel on my car to drum on. Finally, something prompted me to invest in an economical set of electronic drums and I’ve had fun pounding on them. My wife doesn’t seem to mind, at least not too much. Especially since I can turn down the sound to minimize the disruption.

Like the guy down the hill who belts out his tunes as best he can, my drumming will never merit my entry into any talent contests. Even for senior citizens. But I enjoy it; it’s a way of relieving some stress in these very stressful times in which we live today. And I suspect the Lord doesn’t mind my “joyful noise” either.

Colossians 3:17 says, “And whatever you do, whether in word or deed, do it all in the name of the Lord Jesus, giving thanks to God the Father through him.” If God gives us a passion for something, whether it’s writing or drumming or playing tennis or knitting or gardening, and we do it in the name of the Lord Jesus to the best of our ability, I suspect that’s perfectly fine with the Lord.

I often think of the scene in the film “Chariots of Fire,” where Eric Liddell’s sister confronts him, questioning why he devotes time training for competing in the Olympics instead of preparing to become a missionary to China.

Liddell acknowledges his calling to mission work, before observing, “But God made me fast. And when I run, I feel His pleasure.” Are you fortunate enough to have something that, when you do it, you feel God’s pleasure?