Recognizing the Lasting Imprint of Our Steps

Do you remember the “Footprints in the Sand” story? It’s about someone dreaming of walking along a beach with the Lord, watching a panorama of scenes from his or her life and seeing two sets of footprints trailing behind. Then the person observes that at times, there’s only one set of footprints. 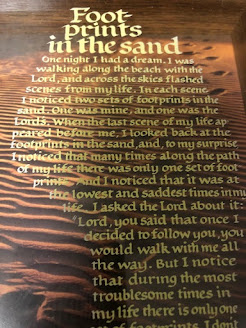 That imagery has always moved me, sometimes to the point of tears. Because I can remember numerous times in my life that, if God were not carrying me, I would not have made it through. In the Scriptures, the Lord promises to be with us at all times – it’s just that sometimes, He’s doing all the heavy lifting.

A plaque with this story, in the shape of a footprint, hangs on my office wall. It came to mind while reviewing the final draft of a novel that a friend, Sondra, has written. Only, she offered a new twist.

Describing a scene where several couples have come together for a social gathering, she writes:

“…I notice the footprints on the carpet. Indentations made by everyone’s shoes. Some large, some small. But the steps visibly show where the guests have walked. All had left their mark. It hit me. Our walk through life leaves a mark. Everywhere we go, everything we say and do, we leave a print. Good or bad, we leave a mark that says, ‘I’ve been here.’”

“Footprints in the Sand” focuses on singular footprints left by the Lord, but Sondra gives a great reminder about the impression, the mark that we leave behind – the impact we have on others as we cross paths with them during our journey through life.

Have you ever stopped to wonder what kind of mark you’re leaving behind?

Remember the ‘WWJD” fad of some years ago? “What Would Jesus Do”? That idea was originated in a little book, In His Steps,” by Charles Sheldon. The title is drawn from 1 Peter 2:21, in which the apostle exhorts, “To this you were called, because Christ suffered for you, leaving you an example, that you should follow in his steps.” In the book, an entire congregation resolves not to make any decisions of consequence without asking the question, What would Jesus do?

But there’s another side to that. There are people around us – family members, friends, coworkers, neighbors, people we minister to – who are watching us, following us. The Scriptures acknowledge that, and say we shouldn’t shrink from such an important, yet humbling responsibility.

Writing to the church in Corinth, after speaking about the freedom believers have in Christ, the apostle Paul boldly declares, “Do not cause anyone to stumble, whether Jews, Greeks or the church of God – even as I try to please everybody in every way. For I am not seeking my own good, but the good of many, so that they may be saved. Follow my example, as I follow the example of Christ” (1 Corinthians 10:32-11:1). Earlier in the book, the apostle gives an admonition that seems almost audacious: “Therefore I urge you to imitate me” (1 Corinthians 4:16). Yet, shouldn’t we be willing to say the same?

To the church in Philippi, Paul wrote, “Join with others in following my example, brothers, and take note of those who live according to the pattern we gave you” (Philippians 3:17). And in writing to his young protégé, Timothy, he says, “Follow the pattern of the sound words you have heard from me, in the faith and love that are in Christ Jesus…” (2 Timothy 1:13).

As a child, did you ever walk in some mud and then proceed to track it through the house? What about the tracks you leave when walking across freshly fallen snow? The mud can be mopped or swept up, and snow tracks will disappear when it thaws or when additional snow falls to fill the indentations. But the tracks we leave in the lives and hearts of those whom we interact from day to day are usually long lasting, even permanent.

So it’s not a question of whether we’re leaving a print or mark as we march on this exciting, sometimes perplexing adventure we call life. The question is, what kind of mark is it that we leave? And are we satisfied with that? If not, what can we do about it – starting right now?
Posted by Bob Tamasy at 3:00 AM

Email ThisBlogThis!Share to TwitterShare to FacebookShare to Pinterest
Labels: follow my example, footprints, footprints in the sand, in his steps, what would Jesus do, WWJD