I don’t travel as much as I once did. Actually, when I think of “road warriors” who habitually hit the road – or rise in the friendly skies – on Mondays every week, not returning until the following Fridays, I never traveled that much. But I recall a time, in the early ‘80s, when I had to fly to three different cities in successive weeks.

En route to my destination on the third week of that stretch, I remember having a disconcerting and disorienting thought: “Now where am I going?” No wonder musicians, after hopping from city to city, night after night, 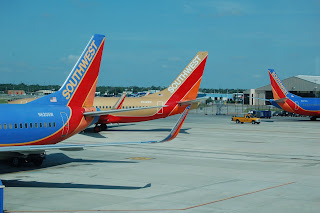 occasionally suffer mental lapses and greet their audiences with something like, “It’s great to be here in…uh…oh, yeah… Chattanooga!”

On a recent trip to Denver it became abundantly clear how much things have changed over the three decades or so that I have been an active participant in airplane travel. To start, if you travel very much, you soon discover a jet is little more than a glorified bus. (No offense to my friends at Arrow Stage Lines.) Planes travel higher and faster, but in many respects they lack the comforts and conveniences of modern motorcoaches.

Case in point: Just before takeoff from my connecting city of New Orleans, the flight attendant announced all electronic devices had to be turned off. That meant the young woman sitting across the aisle from me had to “turn off” her book, contained in a Kindle electronic reader. I couldn’t help but chuckle as I continued reading my book. You see, mine had no on-off switch – just black letters on real paper. While her book was in momentary hibernation, mine continued telling its story.

On an earlier flight I had noticed a young businessman next to me also forced to endure technological slumber, shutting down his iPhone, which meant holding e-mails, voice mails and texts at abeyance until we landed. All around me, laptop computers had to be dimmed while our jet began to soar aloft.

I cringed to envision the wheels of industry slowing to a crawl as its captains were transported from the bayous to the Rockies. Imagine high-tech umbilical cords being abruptly severed, only to be reattached upon landing.

How ever did we exist, much less thrive, without cell phones, notebook computers, and electronic books? Was there really “civilization” back then, those “olden days”? I guess we’ll have to leave that for anthropologists of years still to come to determine.
Posted by Bob Tamasy at 2:33 PM