Two Are Better Than One

Ecclesiastes 4:9 says, “Two are better than one, because they have a good return for their work.” Over the weekend, my son-in-law, David, and I experienced the practical value of that biblical adage.

Our new kitchen sink had been draining poorly for several weeks, frequently backing up on both sides. Even a plumber seemed stumped at identifying the dilemma. Finally, David (a whiz at figuring out all things mechanical) and I (people that know me understand “Bob” and “mechanical” don’t belong in the same sentence) decided to take things into our own hands.

The problem, we surmised, was a blocked air vent on the roof. Until recently I didn’t even know a vent was required to expedite water flow – but since it was evident the pipes were not clogged, we decided to explore that possibility.

Because experience has taught me that when the term “do-it-yourselfer” was invented no one had me in mind, I wisely didn’t try climbing onto the roof until David became available.

It turned out to be a fairly simple procedure, much easier than I had anticipated, but without David’s instructions from below, there’s no telling how I might have complicated matters. Details aren’t important, but suffice it to say that if you have a predominantly right-brain thinker (me) to perform a left-brain task, he’s going to need help.

I was the guy on the roof working on the vent (you might say it was my attempt at getting up in the world). But without David’s handy “clog-buster” water hose attachment and his insightful guidance, I might still be up there, scratching my head and trying to figure out what to do.

It’s true that two are better than one. Our kitchen sink is now draining properly – one small step for mankind, one giant step for me.
Posted by Bob Tamasy at 9:48 AM No comments:

What Haven’t You Done?

I’m not addicted to radio talk shows, but often find myself listening to them – to learn what other people are thinking.

Last week two guys were talking about things most people have done that they had not. One commented he had never drunk a cup of coffee, finished a bottle of beer, watched any of the “Indiana Jones” films, or driven a manual shift vehicle. “Wow,” I thought, “I’ve done all of those.”

Of course, that prompted me to wonder about what things I haven’t done that most people – or at least the majority – have done. At first nothing came to mind, but then a few things occurred to me: I’ve never caught a fish, or fired a gun, or played a piano. I also can’t remember ever not believing in God.

Although I haven’t lived a flamboyant life by any means, I have been fortunate to do a great many things: attend football games at all levels, from peewee to pro; stand in a restaurant atop one of the World Trade Center towers just a few years before it was destroyed; travel to Europe, the Caribbean, Central and South America; learn to drive a 1950 stick-shift Chevy truck; meet Billy Graham; be married 35 years; become a grandfather; see a NASCAR race; interview notables ranging from Jesse Owens to Joni Eareckson Tada; write books; see and photograph the Grand Canyon.

I don’t mean to boast, but I have been blessed to do lots of enjoyable things. Yet perspective has taught me that fulfillment is not about the next thrill or acquisition. As King Solomon wisely wrote thousands of years ago, “A man can do nothing better than to eat and drink and find satisfaction in his work. This too, I see, is from the hand of God” (Ecclesiastes 2:24-25).
Posted by Bob Tamasy at 2:48 PM No comments:

What Difference Can We Make? 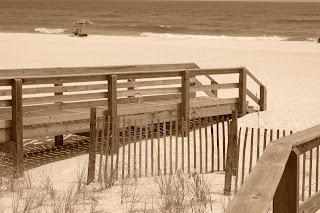 Everywhere we look there are needs – children in poverty, individuals out of work, homeless people approaching as we walk down the street. We can get discouraged, or shrug our shoulders and think, “What difference can I make?”

Recently I was reminded of the story of an artist on a beach vacation. One morning walking along the shore, he spotted someone that appeared to be dancing in the sand, celebrating the new day. Getting closer, the artist noticed the young man reaching down, clutching something and then running toward the waves and throwing the object into the water. The person repeated the action again and again.

Finally, the artist drew close enough to see the man was picking up starfish that had washed up ashore, then sprinting to the water and restoring the little animals to their watery environment.

“What are you doing?” the artist inquired. “I’m returning the starfish to the sea. Lying here in the sun, they’ll die,” was the response.

The artist laughed, gazing down the beach. “There are thousands of starfish baking in the sun. What difference can you possibly make?”

Without a word, the man scooped up another starfish, sprinted toward the water and threw it in, well beyond the breaking waves. Striding back to the artist he said, “I made a difference for that one.”

I’m convinced the world would be a much better place if we all took a similar approach as we observed the pressing needs around us. Individually, we can’t possibly make a difference for everyone or for every situation. But within the scope of our gifts, abilities and experience, we can make a difference in the lives of at least a few – simply by being willing to expend a little time and energy.

Who knows what difference your investment will bring?
Posted by Bob Tamasy at 11:38 AM No comments:

The Price of Prominence

The sports world has been rocked by reports of misdeeds by many of its prominent figures:

• Michael Vick recently completed his jail term for sponsoring illegal and inhumane dog fighting.
• Former Tennessee Titans quarterback Steve McNair was found murdered by his girlfriend, who committed suicide. McNair’s survivors included a wife and children.
• Ex-New York Giants wide receiver Plaxico Burress was indicted by a grand jury for illegally carrying a gun into a New York City bar (wounding himself in the process).
• Boston Red Sox star David Ortiz was the latest baseball player exposed for using illegal supplements – although he claims not to have known he was doing anything wrong. He joins the elite club that already included Mark McGuire, Sammy Sosa, Barry Bonds, Alex Rodriguez, Manny Ramirez and others.
• Most recently, Louisville head basketball coach Rick Pitino, also married with children, purportedly admitted providing money to a woman with whom he had one or more sexual liaisons when she said she could not afford an abortion.

The reaction? I have heard everything from “ban them from sports forever” (in McNair’s case, relegate his memory to public disgrace) to indirect references to Jesus’ statements, “Judge not lest you be judged” (Matthew 7:1) and “let him who is without sin cast the first stone” (John 8:7).

Each of these men was given much – talent, fame, money, influence. Shouldn’t we have a right to expect much in return, at least in terms of personal ethics and integrity, as well as on-field (court) performance?
Posted by Bob Tamasy at 2:36 PM No comments:

Advice for the Newlyweds

Our daughter, Amy, married Chris on Saturday. At the rehearsal, I offered them advice from more than 35 years of marriage experience:

Who’s most important in your marriage? Putting your spouse first, rather than yourself, brings unimaginable joy and harmony. “Do nothing out of selfish ambition or vain conceit, but in humility consider one another more important than yourself” (Philippians 2:3).

Love isn't a feeling. Love is not an emotion, something to fall into and out of. It’s determining to honor and serve one another unconditionally. “Love is patient, love is kind…. It is not rude, it is not self-seeking, it is not easily angered …. It always protects, always trusts, always hopes, always perseveres” (1 Corinthians 13:4-7).

Marriage is not ‘50/50.’ A successful marriage requires a 100% commitment from both partners. Two becoming one isn’t easy – very different individuals, with different interests, both broken by sin. “Wives, submit to your husbands as to the Lord…. Husbands, love your wives, just as Christ loved the church and gave himself up for her…” (Ephesians 5:22-28).

You can’t meet all of each other’s needs. When God said it was not good for man to be alone, His intent was not for the spouse to meet all of the other’s needs. Ultimately, He wants to meet our greatest, deepest needs – for fulfillment, significance. “And my God will meet all your needs…” (Philippians 4:19).

Eliminate “divorce” from your vocabulary. If you never say the word, it never becomes an option. “For better and for worse” acknowledges some times will be worse, some will be better. “Consider it pure joy…whenever you face trials of many kinds, because you know that the testing of your faith develops perseverance. Perseverance must finish its work so that you may be mature and complete, not lacking anything” (James 1:2-4).
Posted by Bob Tamasy at 2:21 PM No comments: 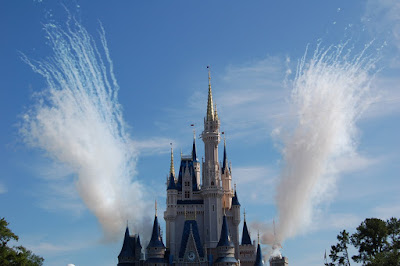 Earlier this year, my wife and I had an opportunity to spend time at Walt Disney World in Florida with some of our family members. We had been there before, but each return trip is just as amazing an experience as the one before.

We visited the Animal Kingdom, EPCOT and Hollywood Studios theme parks, enjoying the sights and sounds of each. But without question our favorite – and probably the favorite of millions of visitors annually – was the Magic Kingdom. It’s where you find all of the popular Disney characters: Mickey Mouse, Donald Duck, Goofy and Pluto, Peter Pan, Snow White, Sleeping Beauty and many others.

The Magic Kingdom is a feast for the eyes with a brilliant kaleidoscope of colors in every direction. Whether you’re taking leisurely boat rides through “it’s a small world” or the more raucous “Pirates of the Caribbean,” experiencing the ups and downs of the Big Thunder Mountain roller coaster, or just strolling toward Cinderella Castle – the park’s focal point – you tiptoe to the brink of sensory overload. What a testament to human creativity and imagination.

However, there is another kingdom, one I have yet to see, that intrigues me even more. In the Bible’s New Testament we read, “Therefore, since we are receiving a kingdom that cannot be shaken, let us be thankful, and so worship God acceptably with reverence and awe, for our ‘God is a consuming fire’” (Hebrews 12:28-29).

Without question, our earthly kingdom has been shaken repeatedly; economic turmoil, natural disasters, war, health scares and numerous other concerns keep our emotions on edge. For that reason alone, I find great encouragement and comfort in the assurance that the coming kingdom – God’s eternal kingdom – “cannot be shaken.” Nothing we can do, although God knows we have tried, can upset His divine plans.
Posted by Bob Tamasy at 11:29 AM No comments: