When the Bough Breaks

The proverbial question asks, “If a tree falls in the forest but no one is there to hear, does it make noise?” I’m know it 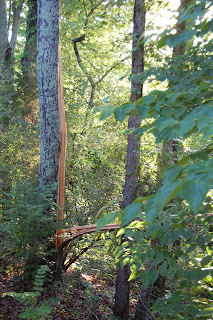 does, based on an experience my wife and I had recently.

We were watching a favorite TV show, trees far from our minds, when a thunderous rumble shook our house. At first I thought it was the neighbors next door, but it sounded so close I went to investigate.

I discovered a giant limb, more than eight inches in diameter, had broken off a large tree in our backyard, collecting another huge branch in its descent. The second branch peeled bark off the tree nearly to the ground as it fell. Both branches came to rest on some power and cable lines, but the lines were of “tree strength,” so we didn’t lose electricity or – egad! – our cable.

Thankfully, the limbs were on the side of the tree away from our house or the result would have been calamito

us. The heavy limbs would have crashed through the roof and who knows what kind of damage would have resulted. So praise the Lord for growing the branches on the safest side of the tree!

There would have been other consequences: Working out of my home, I would have had to open a branch office. Even worse, despite my aversion to risk-taking, I would have been forced to go out on a limb.
In all seriousness, we’re thankful to God for preventing what could have been a very serious situation. “The trees of the Lord are well-watered, the cedars of Lebanon that he planted…. May the glory of the Lord endure forever; may the Lord rejoice in his works – he who looks at the earth, and it trembles, who touches the mountains, and they smoke” (Psalm 104:16,31-32).
Posted by Bob Tamasy at 1:40 PM