Extra! Extra! Still Reading All About It 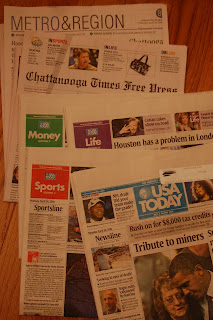 Just finished reading the latest edition of USA Today. Admittedly, I’m an incurable newspaper junkie. My first 10 years in journalism were as a newspaper editor; even though subsequent years shifted my work to magazines and books, there’s still nothing like the day’s newspaper resting crisply in my hands.

Newspapers have changed dramatically through the years – actually, centuries. The days of “hot off the presses” are long gone; slow, cumbersome hot-type presses were replaced midway through the 20th century by "cold type." “Extra” editions also became passé with the advent of television, especially cable TV. By the time newsboys could be hawking special editions on street corners, the broadcast media had scooped them hours earlier.

USA Today became one of those “giant steps for mankind,” making splashy use of four-color photos and illustrations, along with satellite technology for transmitting entire editions to strategically located printing facilities, making daily distribution across the country a reality we now take for granted.

This “evolution” will continue. In time the newspaper, as I have known it, probably will cease to be. Generation X and the Millennials rarely read newspapers, except perhaps to clip coupons; one day school children touring the Smithsonian will marvel to discover newspapers once were produced on paper – newsprint – rather than presented on video and computer screens.

Ecclesiastes 3:1 tells us, “There is a time for everything, and a season for every activity under heaven.” Even though newspapers are becoming archaic, relics of ages past, I’m proud to have been a newspaper editor, reporter and photographer, devoted to providing fair and balanced news coverage to an interested readership.

The end has not come, but it’s nearing, I fear. For now, May the blog be with you!
Posted by Bob Tamasy at 2:46 PM