The Challenge – and Indescribable Blessing of Marriage

Among the many things that can fall into the category of “we don’t know what we don’t know” is the mysterious and oft-maligned institution of marriage.

A couple gazes starry-eyed at each other on their wedding day, filled with great and grandiose expectations as they repeat the magic words, “I do.” Sooner or later, even if only momentarily, “I do” turns into “I did?” when they encounter a stiff dose of reality. Where happened to all those hopes and anticipations?

Part of the problem, I suppose, is that often the couple enters into the relationship thinking, “He (she) will meet all my needs.” Talk about mission impossible! In most cases, two very different people are committing to a lifelong partnership – kind of like a square peg and a round peg trying to fit into a triangular hole together.

The good news is, despite the growing trend in our society to disparage marriage as an archaic, overly restrictive tradition, there remains a warm place in our hearts for the institution. That’s why even “The Bachelor” and “The Bachelorette” usually conclude with the magic moment when a guy drops to his knee and asks, “Will you marry me?” (In these days of equality, why we don’t see a gal dropping to her knee to pop the question?)

Anyway, millions of people get married every year; statistically about half of them stay married. Others find it more difficult than they thought, and yet they remain hopeful, attempting marriage with multiple individuals in succession. Maybe they’re convinced third time’s the charm – or the fifth. 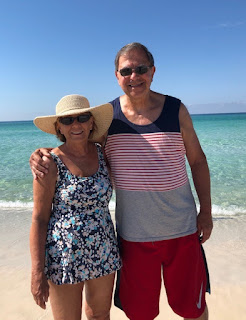 As this is being posted, my wife and I are celebrating our 46thwedding anniversary. Frankly, if there were a Congressional Medal of Honor for marriage, my wife would deserve it. She’s put up with a lot over our more than 4½ decades together, and we’ve weathered our share of the proverbial ups and downs, trials and tribulations. But we’re both glad we worked at it, and worked at it…and worked at it. And we’re still working at it.

If someone were to ask what our secret for an enduring marriage is, we’d have to admit we don’t have one. We just determined to stay committed to one another, and we’ve been able to weather some bad times so we could enjoy lots of good times. But more than that, even though it didn’t start that way, our marriage has been centered about the Lord Jesus Christ.

When the apostle Paul wrote, “I can do all things through Christ who strengthens me” (Philippians 4:13), his context wasn’t about marriage – but it could have been. Because the vows we take – the “sickness and in health, richer or poorer…” part? The “as long as we both shall live” part? They’re extremely difficult to live out apart from the power, wisdom and guidance of the Lord.

There’s a passage in the New Testament book of Ephesians that often gets people’s noses out of joint: “Wives, submit to your husbands as to the Lord” (Ephesians 5:22). In today’s culture, that verse seems to fly contrary to conventional wisdom. “Submit” to your husband? How dare you?! However, that verse is nestled between two other passages that elaborate on the why’s and how’s of this directive.

The first is Ephesians 5:21, the preceding verse, which admonishes us to “Submit to one another out of reverence for Christ.” So it’s not a submission of one person as a lesser to another who is greater. It’s a mutual, deferential submission. Giving way to each other.

Genuine love isn’t the touchy, feely type of emotion we see glorified in the Hallmark movies, but rather giving preference to the desires and needs of another. The word for love most commonly used in the Scriptures is the Greek “agape,” which means unconditional, sacrificial, selfless love. It hearkens to the soldier who gives his or her life for comrades, a parent doing whatever is needed to protect a child, and ultimately, Jesus dying on the cross. Not for anything He had done wrong, but for the wrongs – the sins – of each and every man, woman and child. As an old friend used to say, Jesus took the rap for us.

The other passage comes soon after the “wives submit to your husbands” verse. Ephesians 5:25-28 refers to Jesus’ ultimate sacrifice when it says, “Husbands, love your wives, just as Christ loved the church and gave himself up for her…. In the same way, husbands ought to love their wives as their own bodies.” Sadly, many husbands fail to live up to this – as I have on numerous occasions. We love them, but only up to a point. “Don’t make me sacrifice too much,” we rationalize.

We don’t have that option. There are no caveats, no exceptions, placed on how much or in what ways we’re to love our wives as Christ loved the Church. When we ask, “How much?” we only need to visualize Jesus, with arms outstretched on the cross, for the answer. That’s how much!

The apostle Paul beautifully concludes this passage when he exhorts, “…each one of you must love his wife as he loves himself, and the wife must respect her husband” (Ephesians 5:33). Husbands should love their wives unconditionally, without limit. And wives are to respect their husbands – value them and give them the admiration they long to receive.

If you’re looking for a recipe for a successful, long-lasting marriage, there it is. Long after the echoes of “I do” have faded, and the occasional “I did?” arises, then we can smile and think, “Yup, I did!”
Posted by Bob Tamasy at 3:00 AM