We Have Seen the Light – But It’s Leaving Us 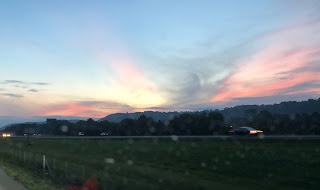 By now you’re probably aware of the bad news: All of us in the Northern Hemisphere, after enjoying longer days with more daylight, are entering the downside of that annual curve. Our longest “day,” in terms of sunlight, passed several days ago, propelling us toward fall and the dark, dismal days of winter.

This march toward less light saddens me. I’m not an outdoorsy kind of guy, but I enjoy light, whether it’s in nature or indoors. Whenever I enter a living room that’s relatively dark because the windows don’t capture much light, my mood moves downward a notch or two.

On the other hand, walking into a brightly lit area – a supermarket, a mall with sunlight streaming in from overhead, or a well-illuminated kitchen – perks up my mood considerably. Walking along a bright, sun-drenched beach, as I did recently, is the ultimate.

To crave the light is as it should be; that’s how it’s been from the beginning of days. God’s first recorded words are, “Let there be light” (Genesis 1:3). What an explosion of illumination that must have been! And that has been His will ever since. In fact, Jesus boldly declared, “I am the light of the world. Whoever follows me will never walk in darkness, but will have the light of life” (John 8:12).

In science classes, I learned there are three primary properties of light: luminiferous (illuminating things); actinic (bringing about chemical reactions, such as photosynthesis); and calorific (creating heat). But in a broader sense, the greatest thing light does is bring life.

Try to grow a plant in perpetual dark. Good luck with that. One common – and simple – cure for newborn babies with jaundice is to expose them to light. When it’s dark, most of us feel tired and go to bed; in the morning, once the sun has risen, we spring out of bed (or crawl) and prepare for a new day of life.

Darkness is also often associated with bad things. In the dark, many people behave in ways they would never consider doing in the light. When my wife and I watch a Hallmark mystery movie, or an episode of a show like “NCIS,” the opening scenes typically take place in the dark. Uh-oh! That signals nefarious individuals lurking in the shadows, poised to perform heinous deeds.

These are among the reasons God in His Word speaks so frequently and eloquently about light. As 1 John 1:5-7 tells us, “God is light; in him there is no darkness at all. If we claim to have fellowship with him yet walk in the darkness, we lie and do not live by the truth. But if we walk in the light, as he is in the light, we have fellowship with one another, and the blood of Jesus, his Son, purifies us from all sin.”

That’s pretty convicting. Are we walking in the light, in close fellowship with God? Or do we feel a tug from darkness, pulling us away from thoughts and actions that honor and glorify Him?

Another thing about light and darkness: They can’t tolerate each other. They can’t co-exist. Walk into a darkened room and turn on a light, and darkness flees – perhaps hiding behind a chair where light doesn’t penetrate. Even there, if you shine a flashlight, the darkness disappears.

This offers one explanation for the increasing enmity Christianity is facing in our nation. This antagonism is well-established in other parts of the world. Early in the gospel of John we read about Jesus, “In him was life, and that life was the light of men. The light shines in the darkness, but the darkness has not understood it” (John 1:4-5).

The darkness “has not understood it.” Wow! Have you ever experienced frustration in trying to explain truth from the Bible to someone who doesn’t believe it, even rejects it? When living in darkness, it’s hard to comprehend light.

This, ultimately, is why Jesus took on human form and entered this world. He came to pay the penalty for our sins – for anyone who will turn to Him for forgiveness and receive the gift of eternal life. He also came to bring light to a world enshrouded in darkness. Jesus told His disciples, “As long as it is day, we must do the work of him who sent me. Night is coming, when no one can work. While I am in the world, I am the light of the world” (John 9:4-5).

This is interesting, because we know that after His resurrection and spending 40 more days with His followers, Jesus ascended back to heaven. He’s no longer a part of the world in a physical sense, although He remains here through His Spirit. So, who’s supposed to supply the light? The Scriptures answer that question very clearly. We are:

“You are the light of the world. A city built on a hill cannot be hidden. Neither do people light a lamp and put it under a bowl. Instead they put it on its stand, and it gives light to everyone in the house. In the same way, let your light shine before men, that they may see your good deeds and praise your Father in heaven” (Matthew 5:14-16).

Every day, it seems darkness is seeking to take a stronger foothold in our world. Perhaps the daily decline of sunlight until late December is symbolic of that. That doesn’t mean the light isn’t necessary. We should still make every effort to expel the darkness by shining the light – the light of Christ – into a world that says it wants nothing to do with Him.

One of the best ways for revealing the light of Jesus is by demonstrating the love of Jesus. As yet another passage from 1 John states:

“…I am writing you a new command; its truth is seen in him and you, because the darkness is passing and the true light is already shining. Anyone who claims to be in the light but hates his brother is still in the darkness. Whoever loves his brother lives in the light, and there is nothing in him to make him stumble” (1 John 2:8-10).

In a time of such discord, hatred and rancor between factions of people, the light of Jesus Christ is needed more than ever.

Email ThisBlogThis!Share to TwitterShare to FacebookShare to Pinterest
Labels: light