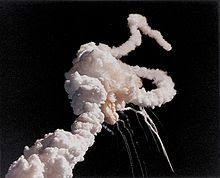 Isn’t it amazing how some of our most vivid memories involve tragedies?

We often hear questions like, “Where were you when…:

Today people across the nation are remembering the Challenger disaster that occurred on this date 25 years ago. I was at work, writing an article for our organization’s magazine.

Because schoolteacher Christa McAuliffe was on the flight, like most Americans I knew about the scheduled takeoff. Space Shuttle missions had become so commonplace they didn’t always get a lot of attention, but publicity about the personable educator had made this one different.

To watch the celebrated launch, we had set up a TV in a room used for working on our publications.We cheered as the rocket took off, marveling at the power pushing it skyward and wondering what it must have been like to be strapped in the spacecraft, poised to leave the Earth’s clutches.

At first, the plumes of smoke didn’t phase us. They appeared like Fourth of July fireworks; not being veteran Shuttle launch observers, we thought that was how it was supposed to look. But news commentators soon began informing us what we had seen was not business as usual, but rather a calamity in which there would be no survivors.

We learned many things that day, but perhaps most poignant was the reality that life is unpredictable – things can change dramatically, in an instant.

In 1965, a rock band called The Byrds recorded a hit song called “Turn! Turn! Turn!”, originally written by Pete Seeger with lyrics adapted from the third chapter of the Old Testament book of Ecclesiastes. The first two verses of that chapter state, “To every thing there is a season, and a time to every purpose under the heaven: A time to be born, and a time to die….”

We might not like it. But as Edith Ann, the little-girl character portrayed by Lily Tomlin in the TV variety classic, “Laugh-In,” used to say: “…and that’s the truth.”

Our time on this Earth might not end in a manner that merits national news coverage – hopefully not. But it will come, one way or another. So we would be wise to treasure each day, treat it as a rare gift, and seek to be good stewards of the time and opportunities presented to us. Love our loved ones well, use our gifts and talents to make a difference in others’ lives, and work toward leaving a legacy we won’t regret.
Posted by Bob Tamasy at 11:15 AM