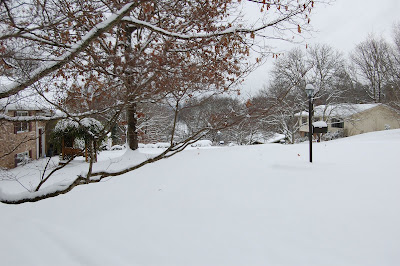 We’ve been busy shoveling out, like much of the nation. Snow, ranging from six to 10 inches, fell upon the Chattanooga area, the largest accumulation – our friendly meteorologists tell us – since the 24-inch snowfall of 1993.

Other parts of the U.S. have seen much more snow this winter. But for our area, several inches of snow on Christmas Day followed by early Monday’s frosty blanket is more than Southeastern Tennessee folks are used to.

Looking at the snow is fun. Shoveling it, as well as driving in it on our hilly terrain, isn’t. But this morning our snowy street provided a classic example of a timely adage: Many hands might light work.

Surveying our ice-encrusted street was daunting, but something had to be done. I had succeeded in driving down it to take my wife to work, but trying to drive back up was another matter. After several attempts, my car got stuck at the bottom.

I spread some rock salt on particularly problematic spots, hoping once the sun came out the ice and snow would melt enough to permit safe passage. Then several neighbors joined me in chipping away the ice and clearing a path for our vehicles. In less than an hour, we had freeze-free tracks opened and I was able to drive my car up the hill and then down our driveway (which I had already cleared) into the garage.

They say workhorses teamed together can pull multiple times what they could pull separately, and we experienced a similar outcome in working shovels in unison to accomplish a common goal. As Ecclesiastes 4:9-12 tells us, “Two are better than one, because they have a good return for their work…. Though one may be overpowered, two can defend themselves. A cord of three strands is not quickly broken.”
Posted by Bob Tamasy at 2:32 PM