Saturday marks our annual Halloween observance – a rather peculiar holiday, if you ask me. On one level it’s simple fun, children wearing costumes of princesses, scarecrows, animals and cartoon characters visiting the homes of friends, collecting candy in response to an innocent “Trick or Treat.” Even adults join the frivolity, going to Halloween parties dressed as favorite politicians, entertainers or historical figures.

On another level, Halloween has a more sinister side populated by “denizens of the dark.” Historians report the event has both pagan and religious roots, but it’s hardly considered a Christian celebration in any sense. Viewed by some as a “festival of the dead,” according to various web sources, days leading up to Halloween emphasize the occult, feeding off America’s strange fascination with the supernatural, as evidenced by Harry Potter books, the Twilight vampire series, and any number of films about vampires, ghosts and zombies. 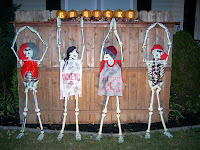 (Even everyday traditions, like Ohio State’s “O-H-I-O,” can take a Halloween twist, as the photo I borrowed from the Columbus Dispatch shows.)

Our preoccupation with death, I suppose, is merely a part of life. Everyone has a beginning – and an end. For many people, the uncertainty – and anxiety – concerns the part at the end. That’s why murder mysteries sell so well, why forensics dramas dominate TV…and why we read the daily obituaries. Rich or poor, male or female, young or old, death is our unavoidable common denominator.

This is one reason I find great comfort in Bible passages like the following:

“For I am convinced that neither death nor life, neither angels nor demons, neither the present nor the future, nor any powers, neither height nor depth, nor anything else in all creation, will be able to separate us from the love of God that is in Christ Jesus our Lord” (Romans 8:38-39).
Posted by Bob Tamasy at 9:11 AM