Who Do You Think You Are?

This week marks the season finale of “Who Do You Think You Are?”, in which celebrities explore their family heritage – aided by genealogists, historians, an ancestry website, and lots of money for travel in pursuit of clues.
This concept isn’t new. In 1977, Alex Haley’s book, Roots: The Saga of an American Family, captivated TV viewers as it tracked a black family’s history from Africa through slavery and through the Civil War.
The Daughters of the American Revolution bases membership on ability to trace family lineage to and before the Revolutionary War. Regardless of ethnicity or nationality, it’s intriguing, if possible, to learn who great-great-grandpa and great-great-grandma were.
That’s why family trees are fascinating. “Who were these people? What did they do? What were they like?”
My knowledge of family history stops with my grandparents. Both of my grandfathers immigrated to America from Hungary; my grandmothers either came from Hungary or were born to Hungarian parents in the U.S.A. I have no idea who preceded them. By the time I cared enough to ask, anyone having answers had passed away. 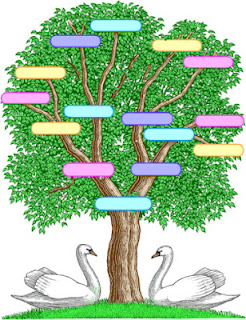 It would be nice to know what my paternal and maternal great- and great-great grandparents did, where they lived, etc. I remember someone saying there was a Hungarian prince somewhere in our family line – or maybe it was just a Hungarian who made prints. I’m not really sure.
I’ve been to Hungary twice, and actually stayed overnight in the town of Tamasi, but there was no time for family tree climbing – especially since I don’t speak the language.
But there’s another ancestry I’m even more interested in. Thankfully, there’s much more information about it. It’s my spiritual lineage, very different from my biological family. More than my physical DNA, this defines who I really am.
This includes the people who contributed – directly and indirectly – to my spiritual growth, and individuals that influenced the lives of those people. There are the brave immigrants who fled England for the New World in the 17th century, seeking religious freedom; Martin Luther, who examined the Scriptures and learned salvation comes by God’s grace, not by works, and insisted the Bible should not be exclusive to the clergy; and countless others God used to guide His people through the centuries.
It’s amazing to think my spiritual family tree includes the apostles Paul, Peter and John; Paul’s mentor Barnabas; prophets like Elijah, Daniel, Isaiah and John the Baptist; as well as patriarchs Abraham, Jacob (Israel), Joseph, and King David.
Women are well-represented, including Abraham’s wife, Sarah; Rebekah, Rachel, Esther; a prostitute named Rahab; a bunch of ladies named Mary, and a Martha.
How do I know these are all branches of my spiritual family tree? In Genesis 12:3, God told Abram, “all peoples on earth will be blessed through you,” and in Genesis 17:16, He declared of Sarah, “she will be the mother of nations….”
Later, in 1 Corinthians 12:27, the Scriptures assures all followers of Jesus: “Now you are the body of Christ, and each of you is a part of it.”
I don’t know about you, but I’m excited about my spiritual family and look forward to meeting each of them face to face. We’ll have lots to talk about – including who we really are!
Posted by Bob Tamasy at 12:09 PM

Email ThisBlogThis!Share to TwitterShare to FacebookShare to Pinterest
Labels: ancestors, ancestry, family heritage, family tree, lineage, Who Do You Think You Are?