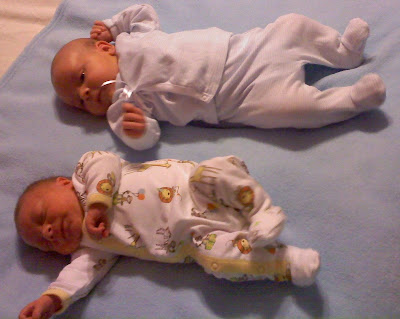 Our extended family has grown considerably in recent weeks, adding two newborn grandsons. Both, in their own way, are what I’d consider “miracles.”

After several years of trying to have children, our daughter Sarah and her husband Alan entered parenthood rather suddenly. They learned of a single mother that had just given birth and wanted to find a good adoptive home for her baby. With little ones already at home, the young woman didn’t feel she could handle the responsibility of yet another.

Sarah and Alan had been looking into adoption and quickly it became evident this opportunity was what some people would call a “God thing.” For them, it meant the joy of finally having a child. For the baby, Maclane, it meant a more stable upbringing than he would have had otherwise.

Then, three weeks to the day later, our oldest daughter Amy and her husband Chris also became parents to a newborn, although Bryce’s arrival was sooner than anticipated. Amy had early stages of preeclampsia, a potentially serious condition in pregnancy, so the obstetrician decided it would be best for both mom and baby to induce labor early.

So, little Bryce appeared about six weeks ahead of schedule. The only hitch was his lungs were not fully developed, not uncommon for preemies. He had to spend a bit more than two weeks receiving excellent care in the NICU at T.C. Thompson Children’s Hospital. During that time, Amy and Chris benefited from the facilities of Ronald McDonald House, since they live more than 30 miles from the hospital.

For Sally and me, it’s another opportunity to be proud grandparents, reaffirming the saying, “If I had known grandkids were so great, I would have had them first!”

As Proverbs 17:4 says, “Children’s children are a crown to the aged.” We agree with that, except for the “aged” part. We don’t think that describes us yet – hopefully not for quite a while!

Beautiful Miracles!! Enjoyed the story & God is so amazing!!!! =) God bless you & your family!!! You are an amazing man of God! Always in my prayers.... Whitney K