Mercy for Those Serving in the Military

“Extreme Makeover: Home Edition” featured an Army staff sergeant seriously disabled in the 2009 shootings at Fort Hood, Texas. It was heartwarming – as the show always is – to watch a couple coping with misfortune get a new house and take the first step in a new life.

The show suggested a broader issue, however. Last week, an article in USA Today reported 16 percent of homeless adults nationally in a one-night survey were homeless veterans. More than 75,000 veterans were calling the streets or temporary shelters “home” that night. Other reports have documented less than stellar health care being provided for vets that return from combat zones. 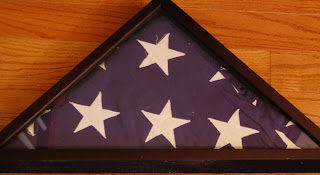 Such dismal treatment is a travesty. I’m not a “hawk,” and have never served in the military – I had a high draft number and was attending college during the Vietnam Conflict’s height – but I think men and women who serve our country are deserving of the best care possible following deployment in hostile territory.

As I was growing up, John Wayne and Glenn Ford movies made war seem like fun; camaraderie shared by soldiers united to defeat the enemy. But I knew better. My dad, who served more than 22 years in the Army, had been wounded twice during battles in World War II and received two Purple Hearts (although he never displayed them).

Dad never discussed the war. If you asked, he offered only brief, non-specific answers or changed the subject. But I remember nights he would awaken from his sleep screaming or gasping. I never learned what nightmares had alarmed him so.

He was proud to have served his country in the military, but talk of war was off limits – “verboten,” as Germans would say.

We often read about discharged soldiers suffering from Post-Traumatic Stress Disorder. We first started hearing about PTSD during the Vietnam era. A friend of mine has founded a non-profit organization to assist those who, like himself, suffer these lingering affects.

Frankly, I can’t understand how anyone returns from war zones without PTSD. Being forced to live – and fight – in alien climates and cultures; never knowing for certain who the enemy might be; seeing friends and fellow soldiers killed or severely maimed in fire fights or by IEDs; enduring long months, even years, of separation from family and friends.

In Luke 10:7, Jesus says, “the worker deserves his wages.” He’s not speaking of soldiers, but the principle is applicable to those serving in the military.

Later in the New Testament, the apostle Paul uses a military metaphor to exhort his young disciple, Timothy: “Endure hardship with us like a good soldier of Christ Jesus. No one serving as a soldier gets involved in civilian affairs – he wants to please his commanding officer” (2 Timothy 2:3-4).

Service in the military may be voluntary – and I’m thankful for all who volunteer to do so. But none of them goes with the expectation of being killed, losing limbs, or becoming physically or psychologically disabled. Those coming back damaged in any way should receive the very best of treatment. They offered their all for us; can’t we do the same for them?
Posted by Bob Tamasy at 10:03 AM