It’s Football Time in the U.S.A. 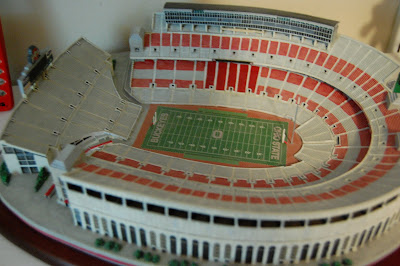 Tonight marks the official start of a new football season! Like it or not football, not baseball, has become our national pastime.

Ironically, unlike the international game of soccer (“futbol” in Latin American nations), our football has relatively little to do with feet – except when players run. In fact, there are consequences for using the foot too much. A punt means you have failed to advance the ball. Kicking a field goal counts for three points, less than half what a touchdown is worth (with a kicked extra point). And rules prohibit players from kicking the ball while it’s in play. Lastly, the field is not measured by the foot, but by the yard. Yardball, anyone?

Nevertheless, football has captured our national fascination. “Why?” is open to debate. I personally believe it’s partly of the extremely physical nature of the game. Seeing a rival player pummeled by a vicious tackle has wondrous cathartic benefits for spectators. And seeing your team’s star runner or receiver zoom past defenders for a long touchdown sets all worries and fears to rest, at least momentarily.

But I think it’s also because games are played only once a week, rather than daily like baseball, or several times a week like basketball. We have an entire week to rehash and dissect the last game, revel in the high points and second-guess the coach. A full week also to anticipate the next game, speculating on how our team will fare, what it must do to win, and what tricks the opponent might present.

Sadly, the Bible says nothing specific about football. The apostle Paul did write, “I press on toward the goal to win the prize…” (Philippians 3:14), but I doubt he had the goal line in mind.
Nevertheless, settle in, grab your remote – and have fun!
Posted by Bob Tamasy at 3:25 PM