Joy in the Unexpected 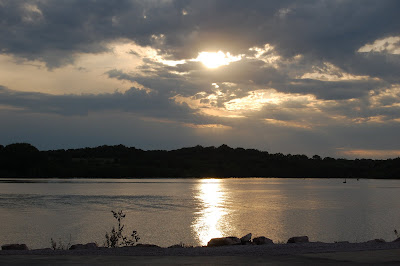 I spent last week in Nebraska on business, expecting to see cornfields, cattle, and lots of flat plains. One thing I did not expect, however, was riding a seven-passenger motorboat on a lake. Lakes in Nebraska? (The lake was manmade, but a lake just the same.)
The evening came to a picturesque climax with a beautiful sunset I was able to capture with my digital camera (see above). Another happily unexpected event.

Some of life’s greatest joys are not those things we most anticipate, but unexpected surprises we encounter without warning. Like the time I was driving home from Valley Head, Alabama and literally found the end of the rainbow.

While meeting with several people to gather information for a book I was working on, I had noticed storm clouds gathering. As I drove north toward Chattanooga, the clouds let loose their contents. My serendipity occurred because was the rain was cascading in front of me, but the sun was shining brightly behind me. As beams of sunlight bounced off the raindrops, they created not one but numerous rainbows spanning the northbound lane of Interstate 59.

One of these miniature rainbows actually spilled onto the roadway and I was able to drive right through it! Sorry to disappoint you, but I can attest from firsthand knowledge there is no pot of gold at the end of the rainbow.

For me, such occurrences are one of the delights of being a follower of Jesus Christ. God is the God of surprises, so I’ve learned to expect the unexpected. In fact, in Jeremiah 33:3, He declares, “Call on Me and I will answer you, and show you great and mighty things, which you do not know.” I think in the original Hebrew, the Lord is saying, “Child, you ain’t seen nothin’ yet!”
Posted by Bob Tamasy at 10:23 AM

Great picture and great post. It is true that some of life’s greatest joys are not those things we most anticipate, but unexpected surprises we encounter without warning. Bless you!